The US Department of the Treasury published a blog post offering advice to other government agencies that are interested in adopting blockchain or distributed ledger technology (DLT) in their internal systems. Such systems, the bureau wrote, are most useful for departments in which central gate-keeping is expensive (such as when staff must manually verify transactions) and there is less than total trust between different parties in the ecosystem. The post includes several lessons that officials gleaned while experimenting with a proof of concept blockchain system that began in October and sought to utilize DLT-based systems to track physical assets such as computers and smartphones, and agency officials praised the technology’s ability to reduce fraud and increase efficiency. Reflecting on the trial, the Treasury’s Bureau of the Fiscal Service (BFS) advised agencies to cut through the hype surrounding blockchain technology and honestly consider whether a distributed ledger will add value to their operations.

Sky Republic’s POV: This is a good example of how executives and enterprise architects need to cut through the hype, and start by clearly identifying the business case or use case. They also need to understand the different value props that each blockchain platform offers, recognizing that not all blockchain platforms were purpose-built with the same enterprise goals in mind, especially when building trust across a B2B ecosystem is so important. To read the full article click here. 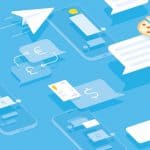